Watsonville, CA – The Santa Cruz County Fair Board of Directors has welcomed their newest member, Eric Hammer of Brookdale. Hammer is the owner and CEO of Hammer Construction, with offices in Boulder Creek, and has been active in a large number of community groups serving the San Lorenzo Valley.

Hammer is a member of the Community Bridges Board of Directors and of the Redwood Mountain Faire Steering Committee. He is vice president of the Boulder Creek Business Association, where he served as president from 2010 to 2013, and a state delegate for the Santa Cruz Democratic Central Committee. Hammer was chair of Community Bridges’ Mountain Community Resources from 2009 to 2011 and of the Boulder Creek Recreation and Parks District Board of Directors in 2005 and 2008.

Hammer was sworn in at the April 22, 2014 board meeting and stated that he was looking forward to “Getting in and start lending a hand after spending a little time listening and learning where he was needed most.”  Hammer will join six other directors including long serving fellow board member Bruce Oneto of Boulder Creek.

The 2014 Santa Cruz County Fair will be held September 9-14 at the Fairgrounds located on Highway 152 just east of Watsonville.  Information on the Fair, and the Fairgrounds - a year round entertainment and event venue, can be found at www.santacruzcountyfair.com

A hi res photo of Eric Hammer at his swear in is available by contacting the writer. 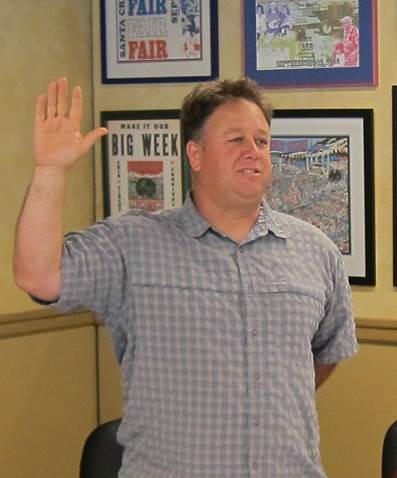